Even if the capital of the Czech Republic is just about 400 kilometers from Munich, the plane is nevertheless the first choice for a stress-free journey (see also why I love flying so much).
Because of that, the booking of the Lufthansa flights was just a matter of form and due to the low price I graded up the outward flight to the Business-class.
Here you can find a separate report about the business lounge in the Satellite-Terminal of Munich Airport.

So what exactly is included on a short-haul flight in Lufthansa Business Class?
Here are the 10 most important benefits:

The 45-minute outward flight to Prague started from the Satellite-Terminal of the Munich airport and was operated by Air Dolomiti on behalf of Lufthansa in an Embraer 195.
For me, as a Business class guest, it was very pleasant to enter the plain as the first to stow the hand luggage stress-free and take my seat 1A, without being pushed by other guests behind me.
I already know the Embraer 195 from previous flights to Warsaw or Salalah and despite the 2-2 seating, as the free legroom in the first row as the free seat next to me convinced totally.

The board service, as I´m used to the Lufthansa Group, was friendly and professional.
The Italian flight attendants were able to speak fluent German and despite the stress on such a short flight they always had a smile on their lips.

Another positive aspect in the Business class – the catering!
While the economy guests just had a small bag of salt crackers, delicious Italian cookies were served before the start in the front rows, as well as a small wine menu.
Shortly afterwards, a tray of porcelain dishes was served, on which a seductive chocolate cake with liquid core was prepared, as well as a cup for tea or coffee.
I decided for a glass of Chardonnay and the obligatory tomato juice, which was served in a real glass – for me, who usually travels in Economy class, it was a completely positive new territory.

The flight itself was very calm and after 45 minutes the airport in Prague was reached.

The Business class guests are allowed to leave the plane first and because of the Priority tag,
my suitcase was the first on the Baggage claim. So I could leave the airport when the Economy guests were still on their way out of the plane.

Finally, a Business class flight is an absolutely positive experience, even if the seats in this
short-haul flight are the same as in the Economy class.

Above all, however, the visit in the Business lounge before the departure was extremely pleasant and if the extra charge won´t be too high, I´ll publish more reports of flights in the Business class in the future. 🙂 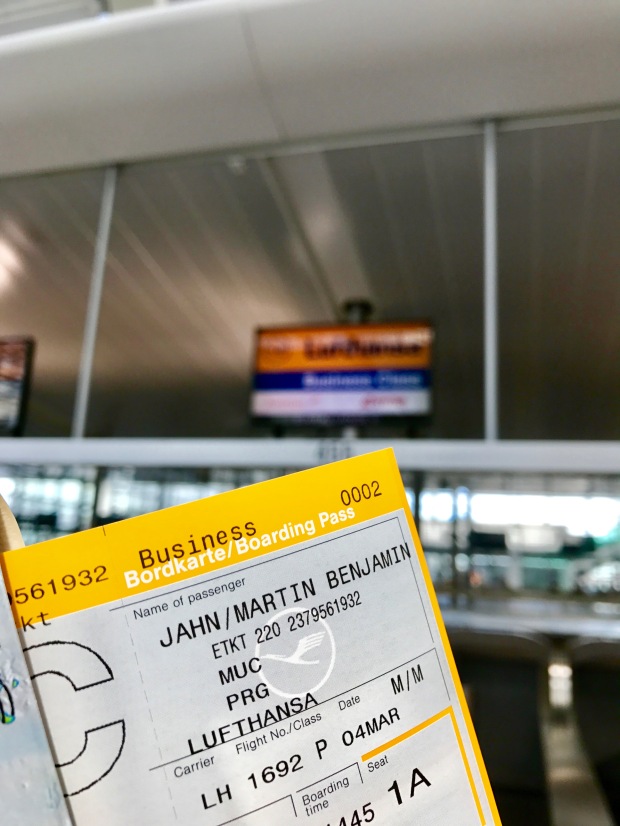 The 40-minute return flight to Munich was operated by Lufthansa Cityline in a
Canadair Regional Jet 900.
I know this type of aircraft from my flight to Odessa already.
After the great Business class experience on the outward flight, the reality in the narrow Economy class of this aircraft brought me back to earth very quickly.

Fortunately the plane wasn´t fully booked and the seat next to me remained free. In addition to the friendly board service (salt crackers and drinks were served) the 40 minute flight passed very quickly.
The flight, as usual, was free of any turbulence.